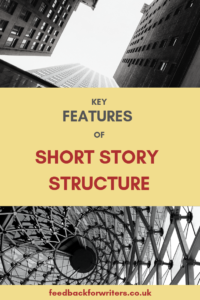 One of the main story elements I analyse here at Feedback For Writers is story structure. Short stories, due to the very nature of the form, have particular requirements, and  I’d like to examine these so I can give you  guidance on some of the main pitfalls I see when reading other people’s work.

What structural elements need to appear in all stories?

First off, I should point out that you need to be telling a whole story.

A short story is a complete entity, which should be able to stand and survive alone.  It has the usual story beats but they might be implied or ‘felt’ rather than detailed. Some of the story might appear in the gaps, in what is not said, as much as what is.

Should A Short Story Have All the Same Features As Classic Three Act Structure?

Well, a short story should contain within it a beginning, a middle and an end, and the key narrative beats of those, so in many ways, yes, it should. In other words:

What Structural Problems Are Specific To Short Stories?

The single biggest problem is not having enough room to tell the story you wish to tell.

Timeframe is a key issue. And focus. You simply don’t have time to spend pages going into this or that backstory or exploring some irrelevance, or putting half a page of beautiful description of setting just to build up the background scenery when you’ve said nothing about the situation your character is in. You have to find a way to keep it spare.

Short stories are usually about one thing. One or two characters, and one moment; the reason you’re telling this story in the first place, so you need to make it a doozy.

And one of the biggest— and I think most fun— challenges  is to find a way to compress the story into a single timeframe.  This is one of the reasons why short stories are often experimental. To compress the whole story into a single timeframe while still making sure you hit the key narrative (and emotional) story beats; the exposition, the conflict, the rising action, the climax, the denouement. You may have all the beats, but they might be in a different order. It’s not always possible, but try if you can you fit the entire story into a timeframe of 24 hours or less. Also, make sure the story is being conveyed scenes and you are showing not telling.

Be brutal with this, and getting it as spare as you can. Ask yourself what’s the minimum information you need to convey in a scene in order to give the reader what they need? Can some things be implied in the gaps, in what is said and not said, shown and not shown? What events happen off-stage? Might some gaps between scenes draw the reader in more from an emotional perspective? What’s the minimum number of scenes you need to have to convey to your reader just what you need them to know?

In my next post, I’ll be looking at the specific problems I see most often with short story structure – and the actions we might take to resolve them.

Check out one of my Sample reader’s reports to see the kinds of feedback on your work that I provide here.