The Anatomy of Story     John Truby

Screenwriting guru and script consultant John Truby goes in-depth about how to build a satisfying story, level by level. The book is designed primarily for screenwriters, and I have used it for screenplays, but I have found the exercises invaluable when writing prose fiction too.

Highly practical, the book focuses on getting the writer to build a coherent story that works at all levels – including working out its particular  “designing principle”. This is the overall strategy you’ll use for telling the story, a concept which takes the whole thing into deep structural territory.  Truby focuses on more than just the basic three-act structure approach. Chapters cover key elements such as how to find your premise, the seven crucial steps of story structure, character, moral/thematic argument, the world of the story and its symbols and how these all work together to create a coherent whole. The book then takes you through Truby’s screenwriting  plotting method (The 22 Steps) which brings everything together step by step.

Although readers will find many of his movie examples outdated (he bangs on about Tootsie, for example) I have  certainly found his story exercises some of the most useful in my arsenal, particularly when I am planning a story or when I am stuck. As a result, The Anatomy of Story has turned out to be of the most well-thumbed and practical writing books in my  collection.

Don’t use if you: 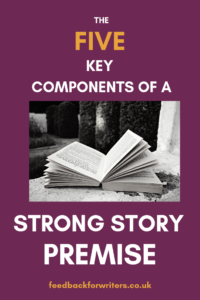 Will your idea make a good story?

What do we mean by a good story? And what factors make up the story premise?

A premise is ideally a one-sentence summary of your entire story. Would you be able to distill your idea into one or two sentences?

Be aware that nearly all unsuccessful stories fail at the premise. Premise is the foundation of your story, on which all the decisions you make during the writing should be based. Within your story premise are a number of key elements you need to be able to “hit” so your story is strong enough to be able to fly. Having a weak premise at the outset will lead to an even weaker story in execution, so it’s worth taking the time to ensure all the following are present.

The 5 Key Components of a Strong Story Premise

Who is your main character? What can you tell us about them? It’s important to make sure that you actually have the right “main protagonist” – it’s the one who the themes and conflicts of the story are really about. You’d be surprised how often final stories turn out to really about someone other than whom you might think at first.  NB even at the premise level, make sure you are specific about who your main protagonist is and their role in the story – just a name on its own won’t be enough or tell you what you need to know.

Do we have to like our protagonists? No, I don’t think we do, although some other writers would disagree with me. I do think we need to be able to relate to them in some way, though. And we need to make life hard for them. Think about the worst possible thing that can happen to this character – and then make sure you throw it at them!

2. Conflict  – with stakes that a reader can identify with, and that your main protagonist is living out throughout the course of the story.

Story is conflict – without conflict, you simply have a list of events. What are the internal conflicts your character is battling with? The environmental ones? The situational ones? What are the choices that your protagonist is torn between? Are they choices that are universal in some way, that would be relatable to your readers? Make sure that the conflict matters, that your reader has a reason to care, regardless of genre.  What is it that your protagonist stands to gain or lose once a choice is made? What exactly is it that they are fighting about at core – and who are they fighting?

3. Desire/goal that the protagonist has

What does your protagonist want to achieve at the outset? How does that relate to what they need? Will they achieve it or not by the end of the story?

Often, what protagonists want is directly in conflict with what they need to make life better by the end of the story. It’s always worth thinking about, not only their desires, but the things that are preventing them understanding or realising what they actually need if you want to deepen your story.

4. Antagonist or Force of Antagonism

Remember, sometimes what can seem to be an antagonist for the protagonist at the outset of the story, turns out not to be “the real enemy’” at all. Think about all the things that are stopping your characters get what they need as well as what they want – or what they think they do. Who or what is the real enemy? How does that relate to the overall themes and message of your story?

5. A set up that will illustrate the conflict

You need a place, a time, a scenario that makes sense. Where are you going to place your characters to best illustrate the premise you have? What about that set up will accentuate the conflicts and themes you have identified?

In Venice with his wife hoping to help her get over the death of their young daughter, a father ignores the pleas of two apparently psychic elderly sisters who claim the spirit of their dead child is warning him to leave.

Set up: A married couple away in Venice, who happen to meet two strange sisters at dinner

Conflict: Wanting things to be normal again versus the reality of grief, reality vs false hope, life versus death, ignore the warning or be taken in by it?

Desire: John wants his wife to be her old self again, he wants things to be ‘back to normal’ and the Venice trip is supposed to be part of that

Antagonist: Grief, death, the fact life can never be the same again, seemingly the sisters, their idea of the ghost and John’s wife’s reaction, but in reality, something much darker entirely. John wants to stay in Venice, but he needs to leave.

How To Isolate Your Story Premise

Personally, I’ve always found the following specific questions the most useful when really trying to get to the bottom of my premise:

It’s worth referring back to your basic premise often, while you are in the process of writing. Finding you need to tweak it is fine, but remember if you do, to you rework any key elements so they are all tying in together. You could even keep the premise visible to you as you write; I recently was given the tip of putting it in the header of your piece, so it comes up on every page, and you always have it as reference.

Taking the time at the start of a project to hone a strong premise is time well spent. It will make sure that the story you are writing stays on track and says what you want and need it to say.

Looking for feedback on your story? Check out my reader’s reports here!