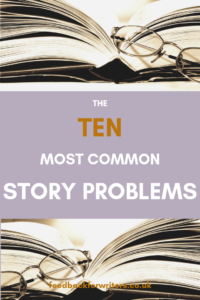 I read a lot of draft stories as part of what I do, as well as from being a member of writing groups. What are the most common story problems I see again and again? And when you’re assessing your own work, what should you be looking out for?

So, so, often, in classes and writing groups, I have found that in the very early drafts of a piece, feedback to other writers still gets focused much too heavily on the minutiae – close, line-by-line editing of the writing – rather than the key elements of the whole reason for doing this in the first place: THE STORY YOU WANT TO TELL.

There is a time and place for close editorial work and red-penning – and it’s way after the first draft.

Close editorial work is about perfecting and polishing a piece of work until it shines. So, it’s  a very good thing – when you are about to submit the piece of work for publication. But close editorial work is not about the big structures and is not what you should be doing the first time you assess a draft. Trust me, if the big structures aren’t there to begin with, no swathes of beautiful description or exquisite phrase-turning or line-editing is going to make the piece stand up or resonate with its readers.  Or at least, not by itself. It risks the work being pretty, but hollow; a bit of nice handwriting, that actually says very little.

Of course, it’s worth noting any glaring grammatical errors or spelling mistakes or awkward phrasing if they jump out at you at this stage, but there WAY more important things to be looking at before that in the early development stages And by “early development,” I mean, for our purposes, the first full draft at least.

The story summary, or synopsis, we talked about in the previous post is a hugely useful at-a-glance look at your entire story from beginning to end. As a synopsis, it should include the most salient features of this piece of work – which means it should start to become obvious where there are gaps or something major is awry.

Questions to ask yourself based on your story summary

Go through the list above and make a note of any areas that you think you need to address. As a reminder; you should use the summary to force yourself to look at what you have actually written, rather than what you intended to write. You are giving yourself the information to be able to plug the gaps and what you’ll need to focus on in the next draft.

The Ten Most Common Story Problems

And of course, you may spot others, depending on your story and your writing practice and style.  Naturally, we all have strengths and weaknesses as writers; that is totally normal. As you may have gathered, I’m a big picture girl at heart. So I can be a little “detail schmetail”, especially in first drafts.

Personally, I have the most problems deciding on endings, which I’ve learned is because I often struggle to really isolate what the core of my story is really about (I often develop stories from individual scenes I’ve written, and end up on a journey of discovery – often with many wrong turns and ill-advised decisions) and therefore can get lost in indecision.

So – make a list of the problems you’ve identified in your piece that you think you’ll need to address. Oh, and pat yourself on the back for the things that you think are working well! It’s good to remember your strengths.

In the next post, we’ll start getting  into more detail about the specifics; and more importantly, what you can do to resolve, including the various resources that are available to get you learning more about them in depth.

This site uses Akismet to reduce spam. Learn how your comment data is processed.